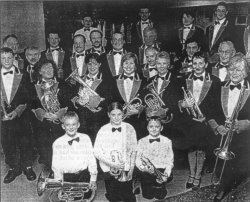 The music is as good as ever and Snowdown Colliery Welfare Brass Band members now look extra smart in new jackets. For years they were dressed in blue but now they are going for a fresh more comfortable look. Their “Officers Mess”-type outfits are cut slightly longer than waist coats. They are mainly black with blue on the lapels and around the cuffs. There is gold braid around the cuffs and collar.

The band bought 25 uniforms, costing a total of £4,137, from a specialist firm in Leeds, R J Handley, which made jackets for the film “Brassed Off”.

Help came from Dover District Council”s Single Regeneration Budget funding via the Community Chest which gave £2,068 towards the jackets.

Help with the coats was very important. We would have eventually afforded them, but certainly not this soon and perhaps not of this high quality. We are very grateful.

The jackets have transformed the appearance of the band, boosted our confidence and made us more professional.

The band, formed in 1929 entirely of miners from Snowdown Colliery, plays at about 30 events a year, mainly in East Kent, raising money for good causes. Two weeks ago it raised £200 at a concert in Minster for the Pilgrims Hospice.

Members mainly come from Dover, Deal and Canturbury but others travel from long distances in Kent. They are from all walks of life. Youngest is 10 and the oldest, 69-year-old Stan Partner, of Minster, Sheppey, now the only ex-miner in the band. He worked in the Leicester coalfield. The Conductor is William Powell who says the band is going from strength to strength.

This summer is going to be busy for us, all through the tremendous commitment of the members. Its a mixture of hard work and social enjoyment.

Practice is at Aylesham Welfare Club every Wednesday, 7:30pm. Anyone interested in joining, booking the band or wanting a list of its engagements can contact the Band Secretary (See About > Contacts page).

Congratulations to #SnowdownCWBand Solo horn player Georgia and her husband Carl for finally tying the knot.